Passed by 5 kilometers south of the border of modern Tashkent, you get into one of the oldest preserved memorial complex of the capital. It was founded in the XIV-XIX centuries as a result of gradual additions around the main building - the mausoleum Zangi-Ata, an important role in the construction of which he played Amir Temur . 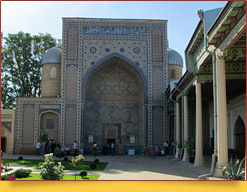 Zangi-ata ( "dark father") - a nickname that Sheikh Ah-Hodge received by the people because of the dark color of their skin. This great Sufi, who enjoyed great popularity in Tashkent during his lifetime (late XII - I half of the XIII century), and honored by the people for many centuries after his death, came from a noble Arab kind of Zangi-ata was fifth murid (disciple). Ahmad Yassavi - recognized as the spiritual leader of all Turkic tribes of Central Asia , and preached in the Tashkent region until his death in 1258.

Perhaps this is due to the great teacher, Sheikh name Ai-Khoja has not been consigned to oblivion, and the road to his grave not overgrown with grass.According to legend, Tamerlane in the late XIV century ordered the construction ofthe mausoleum of Ahmad Yassavi, but the wall is being built mausoleum crumbled for no apparent reason. In the dream, he was the governor Ahmad Yassavi and said that must first be built a mausoleum over the grave of the saint Zangi-Ata. His will was executed, and in the 90 years of the XIV century, was built the first building of the cult-memorial ensemble Zangi-ata, the construction of which lasted until the beginning of XX century, the mausoleum of Ahmad Yassavi was built later time without any hindrance.

Zangi-ata complex includes three parts: the first - a building belonging to the XIV - XIX centuries; The second part - the cemetery and placed on it a mausoleum Ambar Bibi, wife of Zangi-Ata; and the third part - a large garden. The first part, in turn, consists of the mausoleum Zangi-Ata mosque Namazgokh, a minaret, a former madrasah and a courtyard in front of him.

The entrance to the complex (darvazgoh) is the highest of the mosque portal, decorated with patterns of colored mosaics, Arabic script and two turrets (guldasta) on each side. The mosque Zangi-Ata, located in the southwestern part of the architectural ensemble was built by local kaziem (judge) in 1870. As a result of renovation in 1914-1915 a large quince (gallery) in front of the mosque acquired a pitched roof instead of a flat roof, which had originally, south facade of the building has also been changed. Flowers and inscriptions decorating the interior of the premises, it is unfortunately not survived. However, traditional carvings and paintings on the walls and ceiling of quince, as well as its carved columns can be admired today.

In XVIII - XIX centuries madrasah was built in the complex (a Muslim religious school). It is a building of brick with a square shaped trapezoid facing the inner courtyard as cells (hudjras), in which the students live. But the main attraction of the complex - multi-chamber mausoleum Zangi-Ata, in which since the times of Amir Temur preserved gravestone holy, covered with magnificent carving.

Already in 1914-1915 the complex was supplemented by an unusual minaret growing up in front of the mosque. The minaret is made in the form of a tower with two viewing platforms at various levels intended to announce the beginning of gathering the faithful to prayer. Its uniqueness lies in the form, not typical of the minarets on the territory of Uzbekistan .

From the south entrance of the mausoleum Zangi-ata mausoleum for his wife - Saint Ambar-bibi is an asphalt path. This mausoleum, which is 150 meters from the first, and is located on the mazar (cemetery), was built in the late XIV - early XV centuries and represents a relatively small single chamber building of brick length of 9 meters, a width of 6.5 and a height of 13.5 meters. 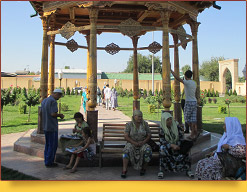 Ambar-bibi considered the patroness of women and mothers. Many women turn to the saint asking for the gift of their children, as well as well-being and peace in the family. According to popular belief, to those requests were fulfilled, it is necessary three times to walk around the mausoleum of Ambar-bibi clockwise, keeping with the palm of his walls. Often there can be seen and the girls sweeping path around the mausoleum. People believe that this ritual helps to clean the house from evil spirits, remove the slander and damage.

The construction of the mausoleums have always been associated with the tradition of ancestor veneration. On the territory of historical and cultural monuments from ancient times held festivals and celebrations. And now this special point of interest is highly respected: every year thousands of people visit the complex Zangi-ata. For the convenience of pilgrims and tourists places have been created for rest, teahouse, car parking space. It is better to come for the whole day to leisurely explore all the sights, touch the sanctuary and learn more about great people, which is still proud of the people of Uzbekistan.